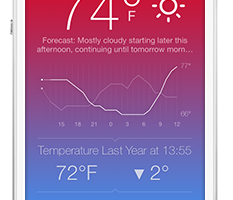 Whether app now has 24 hour forecast graphs for the current and last years conditions. See more in the Whether App...

The “reopen from background : crash” update was released on the iTunes App Store. Please update as soon as possible!

Whether app v1.2.1 fixes the critical “Reopen from Background: Crash” bug… This would happen if you had the app in the background for a while, and reopen it… It blinks and hard restarts. Not a good experience, but I got it figured out. Hopefully will be approved and released next...

Here are the current devices I use to test on.. Really, only to test how an app “runs” on each one.. From the left: iPhone 3GS, iPhone 4, iPhone 4S, and iPhone...

Apple just approved the v1.2 Celsius & Metric update, so it should be available for update via...